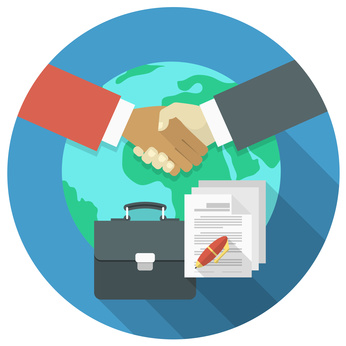 When cross-border distribution contracts come to an end

There are various forms of distribution agreements, such as franchising agreements, selective or exclusive distribution contracts. Moreover, their respective definitions may not be the same in all countries.This paper will focus on situations where an independent distributor buys products from a supplier to resell them to its own customers.

As a basic principle, the parties are free to choose applicable law for a distribution contract in the European Union (EU), pursuant to the provisions of Article 3.1 of so-called “Rome I” Regulation of 17 June 2008.

In the absence of any choice of law, Article 4.1 f) of the abovementioned regulation provides that applicable law is the law of the State where the distributor has its habitual residence – subject to some exceptions.

Outside the EU, the parties are likewise free to choose their applicable law, subject to public policy provisions in force in each relevant country.

Choosing applicable law is a crucial step with major implications. It is therefore essential to thoroughly check the provisions of the law considered for application to the contract.

What if I choose French law for the contract?

Under French law, contract termination does not result in penalties provided that it is based on reasonable ground and occurs with due notice. There are actually two different sets of provisions depending on whether it is a fixed-term or an open-ended contract.

For fixed-term agreements and if no time-limit prorogation or automatic renewal clause was included in the contract, the only thing to do is to wait until the initially agreed ending date. But it is not possible to terminate the contract on an early basis, unless evidence can be provided to establish either negligence on the contracting party’s side or that a force majeure event occurred.

Furthermore, for permanent contracts or if the initial contract was prorogated or renewed for an indefinite period, Article L. 442-6 I 5° of the French Commerce Code provides that notice of termination including a reasonable notice period should be given in writing to the other party, and that, in case of dispute, the judge will set said notice period based on a number of economic criteria such as how anchored in the past the commercial relationship is; the nature and reputation of the relevant products and services; the amount of upstream investments; the share of turnover generated through the distribution agreement; the difficulty of finding a new partner for the affected party, etc. The notice period may vary from three months to two years depending on the situation. Failure to comply with this obligation to give reasonable notice will result in contract termination deemed as having occurred without due notice or not based on fair ground - and will therefore result in penalties. An exemption from giving notice may nonetheless be granted in case of established negligence on the contracting party’s side or of force majeure event.

It should moreover be noted that, once French contract law is reformed (effective date: 1 October 2016) these special provisions governing termination will be integrated into the rules of ordinary law.

If it is proven that contract termination was not based on fair ground and/or occurred without due notice, the court may order the terminating party to pay damages to the other party; in this case, the amount of said damages is set so as to make up for the economic loss actually suffered and based on difficulties faced by the affected party to adapt. The court may also impose an obligation to continue existing employment contracts of the affected party onto the successor in the contract (either the supplier or another distributor) (Article L. 1224-1 of the French Labour Code).

Finally, in some exceptional cases, the affected party may request the judge to extend the notice period.

What if I choose another national law?

English law – Under the Common law system in force in the United Kingdom, the contract is based throughout its lifetime on mutual trust between the parties. Moreover, common law provides for narrow interpretation, which requires to draw up the contract with precision. The parties therefore need to include a detailed termination clause in the contract. For termination of fixed-term contracts, compensation shall be based on the loss of profit suffered until the date on which the contract would have normally ended. For termination of open-ended contracts, when a party considers terminating a distribution contract further to a negligence on its contracting party’s side, it is common practice to send a first letter of formal notice setting a reasonable deadline (which might be 30 days) to cure said negligence. If this first notice has remained unsuccessful beyond that date, a second letter must be sent, including a reasonable notice calculated using criteria similar to those provided for under French law - in practice, this notice period will probably not exceed three to six months. English law on the other hand provides for a wider range of sanctions: the court may not only grant damages to the affected party, but also order both parties to continue the contract or prohibit the terminating party to find a new contracting party. Nevertheless, in practice, these sanctions may be hard to apply. To determine the amount of damages, the affected party must assess damage suffered to a minimum level. Moreover, the court may order payment of punitive damages.

Australian law – The contract is likewise governed by Common law. Legally accepted termination grounds include breach of contract terms, breach by another party, operation of law (misrepresentation, offence to a statute), frustration or consent. When terminating the agreement, the relevant party must comply with contract terms. Should one of the clauses in the contract be deemed or become null and void or illegal, then the parties must first negotiate in order to try and agree on a valid alternative clause; if no such agreement can be reached, only then may they terminate the contract. Unilateral termination may be requested only if the other party has been in breach of a material – and not merely incidental – contractual obligation. There is no such thing as a statutory notice period under Australian law; the length of notice must be stipulated in the contract. The party wishing to terminate a franchising agreement must send a first letter of formal notice setting a deadline (usually 30 days) for both parties to reach an amicable solution, then a second letter with reasonable notice. Additionally, any clause allowing a party to terminate the contract without any ground or justification, as well as any clause allowing a party to inform third parties of termination through negligence on the other party’s side, shall be deemed null and void. After contract termination, a so-called “work-out” period must be implemented for the defaulting party to cure its breach(es). Regarding sanctions, the court may order payment of damages to the affected party, which must assess damage suffered to a minimum level. No punitive damages can be awarded under Australian law. In some circumstances the court may order that the notice period be extended.

German law provides for a reasonable notice period up to a maximum of two years. No ground needs to be provided for contract termination; the distributor may claim compensation only to the extent that it has been integrated into the supplier’s distribution system, which can be evidenced using similar criteria to those used for commercial agency, such as the existence of an obligation to transfer customer portfolio, store goods, hold products for commercial demonstration purposes, prepare periodic reports, or advertise.

Belgian law includes a special set of provisions to frame unilateral termination of exclusive distribution agreements entered into for an indefinite period (Article X 36 of the Belgian Code on Economic Law). Reasonable notice (from 1 to 42 months in practice) must be provided so that the distributor is able to adjust and generate a similar level of turnover. This set of legal provisions is also very protective in the event where the contract is terminated without any fair ground or abruptly: compensation paid to the affected distributor is calculated based on the net profit before tax throughout the notice period.

Finnish law – There are no specific rules for distribution contracts. However the parties can include a special penalty clause in the contract in addition to the termination clause. Unless mutually agreed between the parties, early termination is, legally speaking, not an option for fixed-term contracts. For other types of contracts, a letter of termination must be sent with reasonable notice. In the event where termination occurs further to negligence, the affected party is entitled to damages, the amount of which is calculated based on economic loss actually suffered. The standard rules of Finnish contract law apply when termination occurs without any fair ground.

Polish law – This national law is based on principles of social coexistence, according to which a legal action will be deemed wrongful and rejected if its purpose or effect is to harm the interests of a contracting party. Early termination of fixed-term contracts is normally not allowed. Open-ended contracts may be terminated subject to reasonable notice - failing which, termination will be deemed a contractual default – instead of a default in tort – which will make it easier to seek liability on the part of the defaulting contracting party and obtain payment of damages.

Indian law – All contracts are governed by Indian Contract Act, 1872 which provides that the parties must set the terms of contract termination – including any applicable notice period – and specify the criteria to be used as a basis for calculation of compensation. Through compensation, the defaulting party must reinstate the financial situation which the affected party would experience if the contract had not terminated: Indian Contract Act, 1872 thus distinguishes between standard damages (to compensate for normal consequences of termination), special damages (special circumstances), liquidated damages (as provided for in the contract), and actual damages (loss and damage incurred). Interim or permanent measures may be granted by the court, ordering continuation of the contract (Article 37 of Specific Relief Act, 1963).

AS A CONCLUSION – Before entering into a cross-border distribution contract, one needs to carefully choose applicable law based on the respective consequences of each national law in terms of contract termination. Also, one needs to keep in mind that – if ratified by the relevant countries – the Vienna Convention on the international sale of goods of 11 April 1980 may apply. Application of this convention may be expressly excluded in the contract – failing which, the Vienna Convention will apply. Finally, the most favorable law depends on whether one is to act as the supplier or as the distributor: for instance, Belgian law is more protective of the distributor’s interests, while English law offers a higher level of protection to the supplier.

The following members of the EUROJURIS INTERNATIONAL LITIGATION & CONTRACTS GROUP co-authored this paper: