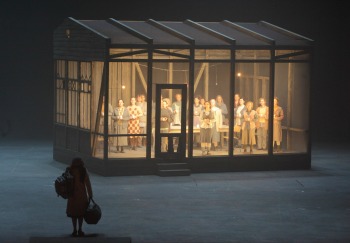 Adam-Caumeil and the triumph of creative freedom


Judith Adam-Caumeil, partner at the Adam-Caumeil law firm and a renowned expert in intellectual property, advised the Bayerische Staatsoper in the proceedings against Mr Bernanos.

The case centred around Dialogues of the Carmelites, an opera by Francis Poulenc, who wrote the libretto based on a screenplay by Georges Bernanos, inspired by The Last on the Scaffold, a novella by Gertrud von Le Fort.

The controversy, however, arose when an avant-garde director, Dimitri Tcherniakov, reinvented the final scene to fit his personal vision. Poulenc’s opera and Bernanos’ screenplay do have similar endings: the nuns mount the scaffold one by one singing the “Salve Regina” followed by the “Veni Creator Spiritus”. They disappear one after the other but, when just one nun remains onstage, a young Parisian aristocrat, Blanche de la Force, who had decided to return to the convent, appears and also mounts the scaffold.

Now, this is not the ending in Mr Tcherniakov’s production, which was performed at the Munich Opera House and sold as a video. Instead, Mr Tcherniakov chose to gather the Carmelites in a glass booth in which a gas cylinder is placed. The nuns are about to suffocate but they do not die: Blanche de la Force liberates them before locking herself in the glass cage, which then explodes.

The courts have rendered opposing decisions in these proceedings since, in the first instance, the Paris Court of First Instance dismissed the successors of Poulenc and Bernanos, while the Paris Court of Appeal later ruled that “Dimitri Tcherniakov’s production deviates in its final scene from the works of Georges Bernanos and Francis Poulenc (...) and thus infringes the moral rights of authors who are attached to it.”

And yet the Court had admitted that the central themes of the work, such as hope, martyrdom, grace and the communion of saints, which were dear to the authors and were staged, had been respected. An ambiguity resolved with the supreme court’s quashing of the decision issued by the Paris Court of Appeal on 13 October 2015 for lack of legal basis.

Undoubtedly, the highest court ends the controversy by recognising the artistic freedom of staging under French law. The scope of this policy decision is very broad, as it can also be applied to theatre, ballet or cinema. “The reasoning of the Court of Appeal showed its flaws: It presented itself as the guardian of the original work by Bernanos and Poulenc, as if a work of any kind could not be subject to interpretation. Tcherniakov certainly brought his own vision to the original work by altering the final scene of the first work, but the music and libretto remained unchanged.

The central themes of the work, including that of martyrdom, were respected because the nuns were ready to die, but they were saved at the last minute. Thus, Mr Tcherniakov cannot be blamed for the distortion of the original work. His work will remain engraved in the memories of spectators and will have a universal, timeless impact. (Judith Adam-Caumeil, Attorney and Partner)
Partager sur
Tweeter cet article Partager sur LinkedIn Partager sur Facebook Envoyer par E-mail